Fooled by my own desires
I twist my fate
Just to feel you
But you, turn me toward the light
And you're one with me
Will you run with me?
~ "Stay With You" by the Goo Goo Dolls

My friend, Tim, (yes, that actually is his real name), received a box of old (very old) stuff from his mom in the mail the other day. It contained a bunch of pictures, etc, from high school. Anyway, in that box was a lovely senior picture of yours truly! Making the situation even better, he scanned it and posted it online for the world to see! He even went so far as to tag the pic on Facebook so that anyone looking for pictures of me will be sure to see it. Hard to believe that 15 years have passed since this picture was taken. 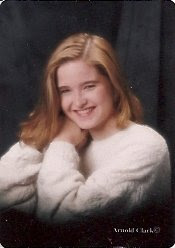 So much has happened during that time. I wish I could go back and interview the girl I was – and maybe give her some advice which would not have necessarily made life EASIER – but it may have made it less DRAMATIC at times. And, I definitely would have taken advantage of my desire to drive fast and pursued a career which would allow me to do so without worrying about traffic tickets and flipping over!

I saw Nicolai today. He manipulated my neck in ways that would have made a grown man cry – but I braved it without a whimper. Cause I'm good like that! He does think my back has loosened up considerably, which is a good sign. Perhaps I really won't be in Physical Therapy until I am 80!

Last night, I actually went to bed early, as I was exhausted and not feeling well. When I woke up this morning, there were 9 text messages sent between 10pm and 2am. I feel kind of badly that I was not available for late night communication – but, a girl has gotta get some sleep once in a while.

So – I am rather dull today as I have very little to offer by way of entertaining anecdotes. Though – it should be noted that if you are a male and have red hair – wearing bright peach dress shirts is a really bad idea. Speaking of males with red hair, I'd like to send a shout out to "Red" and "Prince Harry" – neither of which wears bright peach dress shirts. Well done, boys! I can always count on you both for good fashion sense.

I sent a ton of postcards out from my vacation – but if you have not received any yet – and were looking forward to getting one, let me know, as I ran out of postcard stamps – but still have a pile of postcards to mail.

PUBLIC NOTE: Judge Burnett, you will burn in hell for your own stupidity and corruption and prideful ways! I hope you don't fuck your wife with the same fervor that you fuck the American justice system. Karma's a bitch!