So, ‘your man’ from Galway has been pestering me about not writing. While I do not agree that it is a travesty that my thoughts have not been put in a public forum so that everyone can read them, I finally have something to write about. It hailed last night. Generally, I would refrain from discussing the weather; however, this particular hail storm was exceptionally brutal toward ‘Lucius Verus’,  everyone’s favorite 2010 Honda Civic. 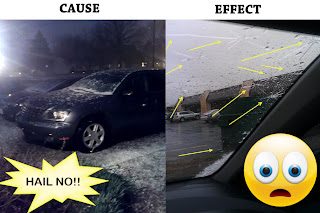 As soon as I heard the hail start, I ran to get a comforter so that I could cover Lucius . . . unfortunately, by the time I ran to the covered front porch, the hail was golf ball size and running into it would have been ill advised and remarkably stupid. All I could do was stand and watch the destruction rain down from the heavens. 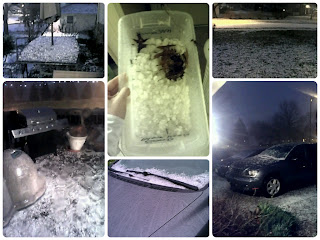 Even Ebie was too stunned by the spectacle that she didn't cower under the bed or bark. She just cocked her head and watched hail pelt the neighborhood. This morning, the streets were covered with a fine, brown powder that were the remains of any dead leaves, which had been effectively ground up by the storm.

While Lucius is in ‘hospital’, I will have a lovely rental car, I’m sure. Perhaps I should take a road trip and put a few thousand miles on it. Hmmmm. . . any ideas?

CONFIDENTIAL NOTE: Happy Birthday to one of four!