How Much Is That Doggy in the Window?

A few years ago, I attempted to enroll myself and Elizabeth in ‘Bark Busters’. It is a lifetime dog/owner training program which promises to unconditionally support you until your dog is well-behaved. The one caveat is that the owner/person must put forth the effort to create consistency for the dog. “Why is this important” you must be asking yourself. It was explained to me that a dog WANTS to behave. A dog WANTS to know the rules. A dog WANTS to please the master or mistress. I did some soul searching during those first few weeks of in-home lessons. I realized one very important fact – my dog does not know she is a dog. Queen Elizabeth T---, similar to her namesake, believes that she is divinely entitled to anything she wants, when she wants it; even if she has to be sneaky. Knowing that we were doomed to failure, I quit the program and resigned myself to having a naughty dog.

I have dozens of excuses as to why this is acceptable. Let me share a few:
Knowing all of this should help you understand why Elizabeth is the naughtiest dog in the world. She is a spoiled brat with an owner who enables her at every turn. Don’t blame her. Blame me. I am the problem. As of late, however, the antics have rapidly accelerated in frequency AND creativity. I want to share a few of her ‘adventures’ from the past 10 days. I would like to be able to tell you that I am exaggerating in the telling of these stories. Alas, I cannot. I want to make this point crystal clear . . . I have a very naughty dog.

Day 1: I walk into the kitchen and see a broken bowl on the floor. As I am cleaning it up, I see the ceramic butter container on its side, under the dishwasher, completely licked clean. WTF!?! Sighing, I picked it up and placed it in the dishwasher, selected the “Disinfect and Sanitize” cycle and left for work.

Day 2: At bedtime, I hear a crash coming from the kitchen. Lo and behold, Elizabeth was ON THE KITCHEN COUNTER. She was clearly looking for the butter container again. Instead, she had knocked my large ceramic Scentsy container onto the floor. It was irreparably shattered.  I yelled her name and she was noticeably startled. Panic took over and she was unable to get down from the counter. I gently lifted her into my arms, scolded her, and placed her in her crate until I could clean up the mess.

Day 3: She found something disgusting to roll around in. The smell was horrific. I dragged her into the bathroom so I could give her a shower/bath. After three good scrubbings, she smelled better. I dried her with a towel and before I could catch her, she jumped into my basket of freshly laundered clothes and proceeded to roll around, leaving Eau de Wet Dog in her wake.

Day 4: If she did anything on this day, she covered it up well.  Well, except for . . . knocking over the cat food container and managing to pry the lid off. Good-bye, cat food. ALL OF IT! Gracie was not pleased – as she was stuck eating dog food for two days.

Day 5: I decided to bake a two layer tie-dye cake. After frosting the cake, I left the icing on the counter with the lid on it. I admit this was my error. Imagine my surprise when I later locate the can of frosting under the couch. I found the lid in front of the bookcase. The frosting spatula was located hours later in her crate, buried under her blanket. I rearranged the furniture; creating more distance between the back of the couch and the counter top. Problem solved.

Day 6: Neighbor calls to inform me that a little black dog was in the yard, playing with the neighborhood kids. All of the kids knew where the dog lived because “she comes and plays lots of days”. This is the first I have heard of it – but great. I walked over and picked her up. I repair the fence slat that she had pushed aside. I use several nails. When I get home from running errands, she is in the front yard lying in the sun.

Day 7: I was awakened in the middle of the night by a craving for a piece of cake. I went to the kitchen and was greeted by the realization that I was not the only victim of a “cake craving”. My cake was gone. All that remained on the counter was the cake plate, a mauled piece of saran wrap, and the toaster. Elizabeth was sound asleep on the couch, icing in her fur. In the morning, I let her out, only to find her in the front yard when I leave for work. I put her in her crate all-day. After work, I find the gap  in the gate where she squeezed through and close it.

Day 8: When I let her out before bed, she is a ninja. It took her exactly  57 seconds to locate another breach in the fence line. I hear her outside the open window on the wrong side of the fence. Papa goes out this time and assures me that it has been repaired.

Day 9: She spent her day in the crate. Every visit outside in the evening was without incident. While I was talking on the phone, she sat in the dirty clothes basket and watched me with interest. When I told her it was bedtime, she jumped up on the bed, circled three times, curled into a little ball, and went right to sleep. In summary, she was a perfect little dog on Day 9. In hindsight, I believe she was preparing for Day 10.

Day 10: I get a phone call from Papa at 9:32am CT. He was taking out the trash because it is trash day. As he is rolling the can to the curb he looks at the neighbor’s driveway, which is strewed with trash. In the middle of that trash was the heroine of these stories. She was sniffing around, looking for something worth rolling in or eating. Papa called her name. She was startled and whipped around to see who was summoning. Seeing it was Papa, Elizabeth started innocently trotting down the sidewalk toward him. The innocence act was ALMOST convincing – except for the trash bag wrapped around her neck, waving behind her like a cape. In between laughs, I asked if he brought her inside and put her in her crate. He explained that he found the two holes she had created along the fence line and filled them so that she couldn't escape again.

Fast forward two hours. My mobile phone rings with an unfamiliar number. It is a neighbor down the street, alerting me to the fact that there was a little black dog in his yard. His girlfriend would keep her company until I could pick her up. He went on to add, I think she’s the same dog that my dad found playing in the yard last weekend. I thanked him profusely and jumped in the car to go get her. When I pulled up to the house, she came trotting over as if I were picking her up from a scheduled play date. The neighbors assured me she was “such a sweet and affectionate dog” and that it was “no trouble” playing with her until I arrived. 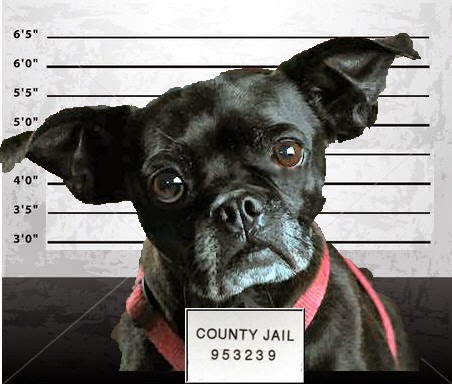 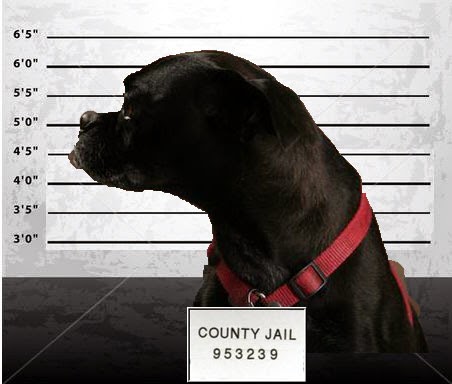 PERSONAL NOTE: Safe travels back to the Emerald Isle.